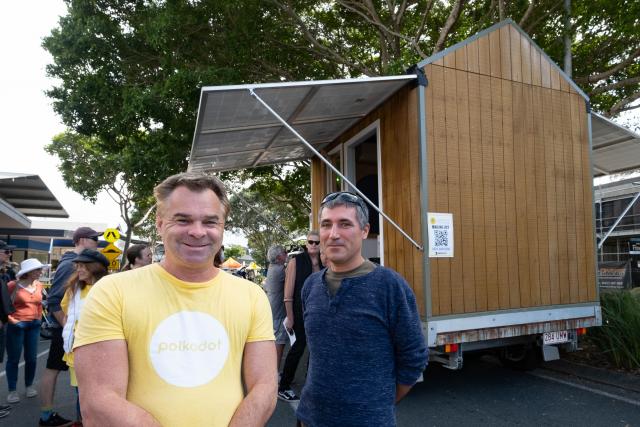 The junction is powered by electrical energy

From bicycles and scooters to family and luxury vehicles to road trains and buses and even a small home, the switch to electric was evident at this year’s Noosa Electric Vehicle Expo and Street Fest which takes place are held last Sunday.

Sunshine Beach Road was closed in Noosa Junction for the first time for the event which proved to be a great success for exhibitors who were able to view their displays and the crowds to look at the innovative vehicles, test bikes and scooters and access to cafes and restaurants along the street.

Among the exhibitors was Janus Electric which is working to fill a growing number of orders to convert road transport fleets to electric, using swappable batteries as a key to success.

Janus Electric general manager Lex Forsyth brought a standard 10-year-old prime mover to the show that the company converted to electric at a cost of $150,000 and they have orders from various companies including mining, forestry and construction industries.

B-double and even triple road trains are being converted, allowing approximately 370 km to be traveled on one battery charge before having to stop and swap it for a fully charged battery, with the three-minute swap replacing the need to wait for a charging station.

Polkadot towed its basic design little house to the expo.

The social enterprise created the Tiny House as a solution to the affordable housing crisis. It can be towed by a regular 4×4, is small enough to be legally placed in a garden and, thanks to its solar/electric power, it is completely off-grid.

Jimmy Hirst of Polkadot said the house that contained a kitchen, bathroom and sofa bed would cost less than $40,000 and could be connected to a second small house for a more comfortable home for less than $60,000.

Bus Stop’s Pete White brought a full-size electric coach, which has already been sold for use at a school on the Gold Coast. Assembled in China using European products, the King Long coach can travel 400 km on a single charge before needing a four to five hour recharge.

There was a range of electric bikes and scooters on display, including trail bikes from Noosa-based Spoken Trail.

Jimmy Dawson said their e-bikes were in high demand with locals and tourists who bought or rented them to explore the Noosa Trail network and threw extra battery power in their backpacks to extend their journeys.

“It extends your reach. On a normal day, you can go to Kin Kin,” he said.

Redlands-based green tech company Star 8 brought a few scooters to the show which were just a sample of the wide range of vehicles it markets around the world, particularly in Asia.

Electric tuk tuts and even self-charging solar ferries are part of the Star 8 range.

Demonstrating student interest in future technology, Matthew Flinders Anglican College brought in an old Land Rover of students converted to electric. Design and technology professor Brendan Gallaher said a group of around 12 to 15 students converted the car in 18 months, which was now registered and had been driven to the show from Buderim school.

“It’s just an educational tool to help children understand their future,” he said.

Student Henry Everson, who had worked on the car conversion, said it had been a great learning experience for the students to see what was next, and his choice when buying a car will be electric – “100%,” he said.

2022-06-24
Previous Post: How online repayable loans can be beneficial
Next Post: Another Okinawa e-scooter shop burnt to ashes due to ‘short circuit’