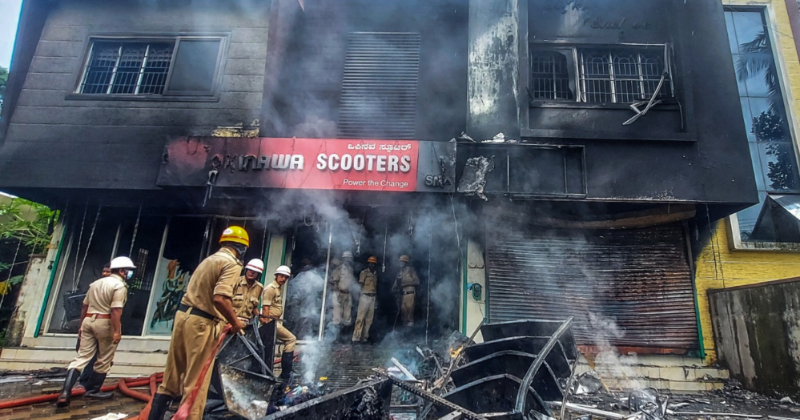 A showroom in Mangalore was reduced to flames after a fire accident. A day after videos of a Tata Nexon EV catching fire in Mumbai surfaced, a fire broke out in an Okinawa showroom.

Several electric scooters were destroyed after a fire in Mangalore on Friday. Electric two-wheeler maker Okinawa Auto Tech says the fire at its Mangalore showroom was caused by an electrical “short circuit”.

In March this year, Okinawa Autotech’s electric vehicle caught fire in Vellore, Tamil Nadu. The accident claimed the lives of two people, including a 13-year-old girl.

“We are aware of an unfortunate fire at one of our showrooms in Mangalore this morning. As stated by the dealer, the fire was caused by an electrical short circuit,” Okinawa Autotech said in a statement. statement Friday.

“We are in contact with the dealership and providing all necessary support,” the company said. “Safety is at the heart of Okinawa Autotech, and we want to assure you that the highest safety standards are maintained at our dealerships across the country,” he added.

The government subsequently ordered an independent investigation into the incident, which the company is also investigating.

It is the second such incident to occur at the Gurugram-headquartered electric vehicle maker’s showroom in the recent past, as earlier this year one of its outlets in Tamil Nadu was engulfed in flames.

At that time, the company had specified that the fire was due to a short circuit.

Besides Okinawa and Tata Motors, fires in electric vehicles from other manufacturers such as Ola Electric and PureEV have also occurred recently.

Following multiple incidents where electric vehicles (EVs) caught fire and caused death and serious injury to people earlier this year, the government has set up a panel of experts to investigate these incidents and make recommendations on corrective measures.

The panel is expected to submit its report by the end of the month. Union Transport Minister Nitin Gadkari also assured on April 21 that any company found to be negligent would be punished.